In a year that is being described as one of the worst years for Oscars fashion, pastel shades, natural makeup and minimal jewelry triumphed. Unfortunately, the more impressive numbers were hampered by the excess of disappointing dresses. The appearance of the pre-show hosts Kristin Chenoweth, wearing a dress more akin to a Broadway costume than a red carpet gown, and Kelly Rowland, whose monochrome gown seemed to be working in conflicting directions, forewarned the many sartorial misses that were to come.

Jessica Chastain described her Armani Privé grown as “a very Happy Birthday Mr. President kind of dress.” In a nod to Old Hollywood glamour, Chastain paired the custom-designed gown with matte red lips, side-swept waves and vintage Harry Winston diamonds. At first glance, the gown seems like a relatively safe option for the red carpet, but the subtlety in the overlay of sequins and the coppery shade of the gown are the perfect complement to Chastain’s stunning hair and complexion. 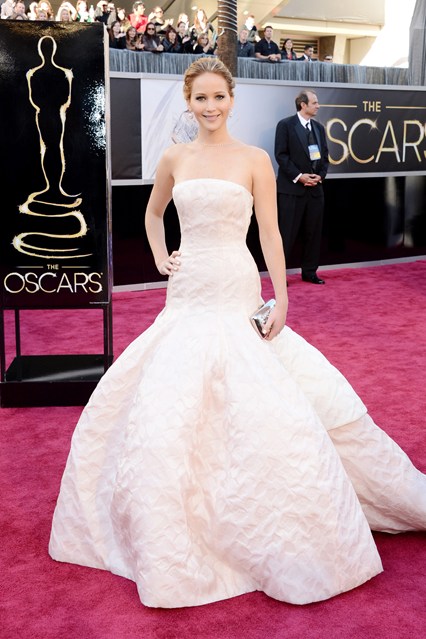 This was Jennifer Lawrence’s night. The new face of the Miss Dior campaign wore a sumptuous blush Dior Couture gown, and chose a Roger Vivier clutch and Chopard diamond beaded necklace, worn backwards to break down the dramatic silhouette and volume of the gown. Although she struggled to manage the grand structure of the dress when accepting her award, she handled the fall charmingly. The look was a perfect choice for the young starlet.

The beautiful French actress celebrated her 86th birthday at the Oscars ceremony. She wore a stunning cobalt blue Lanvin cape dress, enlivened with red lips and some minimal jewellery. Here’s hoping that we can look as dignified and elegant as Riva at 86. 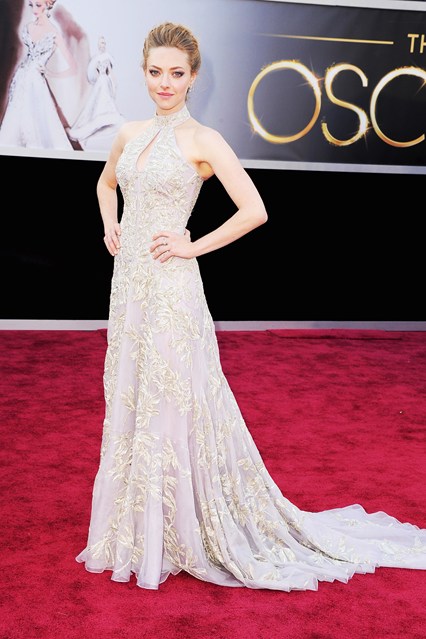 Amanda Seyfried wore an exquisite embroidered organza gown by Alexander McQueen. The shade of the dress unfortunately turned out a dull, unflattering grey in many of the photos from the night, but is in fact a delicate lilac. Her vampish purple cat eyes posed a refreshing update of the smokey eye, perfect for spring. 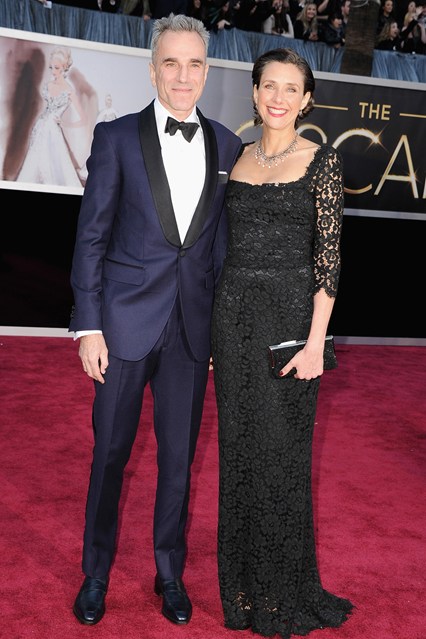 It is usually very difficult for men to make a statement on the red carpet (with Mickey Rourke being a prime example of how not to do it, time and time again). Amidst a sea of black, I appreciated Daniel Day-Lewis taking a risk in midnight blue. 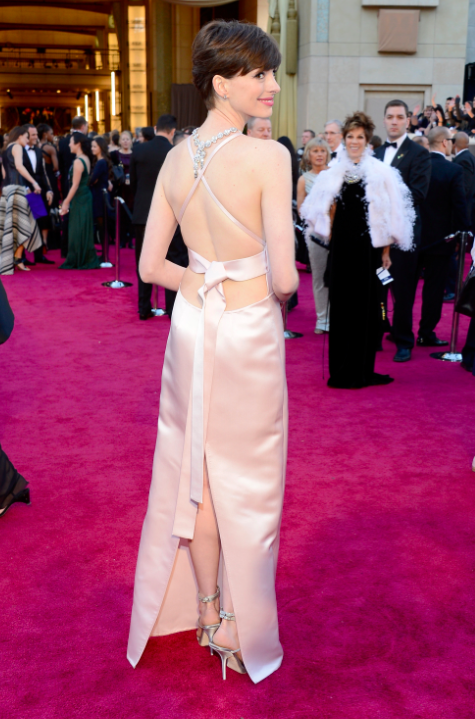 Only a few hours before the ceremony, Anne Hathaway decided to opt for this pale pink satin Prada dress over her trademark Valentino. Hathaway seems to be channeling Audrey Hepburn with this look, but the shape of the dress just didn’t quite work, particularly the bizarrely high-cut rear of the dress, about which Hathaway quipped, “It’s business in the front, party in the back.” The oddly placed darting of the heavily structured gown unfortunately ended up gaining Hathaway the nickname ‘Les Nipplerables’ from TMZ. 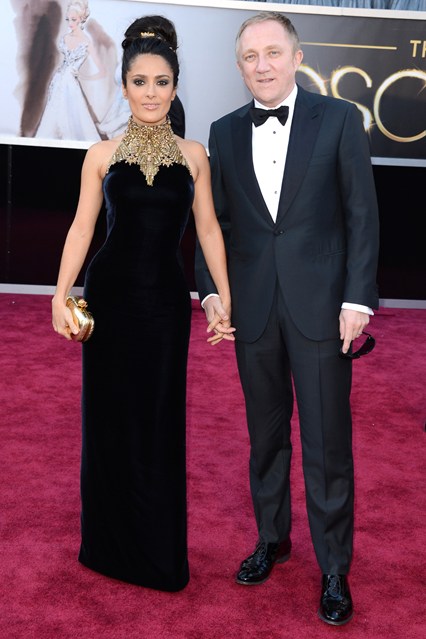 Hayek’s husband, François-Henri Pinault, owns Yves Saint-Laurent, Gucci, Alexander McQueen and Stella McCartney. With such an incredible wardrobe at her disposal, why did she choose this over-the-top McQueen gown? Perhaps in a different fabric, with a bold lip, the dress could have worked, but the overly-embellished neckline is too harsh with the heavy velvet of the gown and Hayek’s tight up-do. 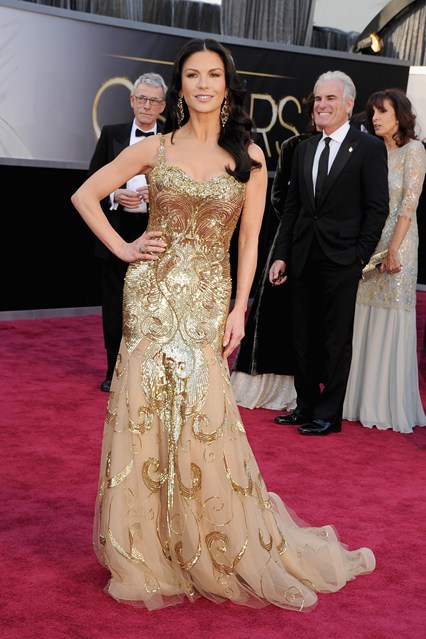 This gold Zuhair Murad Couture dress would have been flawless on Beyoncé. Unfortunately, Zeta-Jones is overwhelmed by the gaudy metallics, and ends up looking like a fading showgirl, which wasn’t helped by her pitiful Chicago performance during the show. The poor woman was also rather painfully snubbed by Ryan Seacrest when she asked to flaunt her nails for E!’s mani-cam. 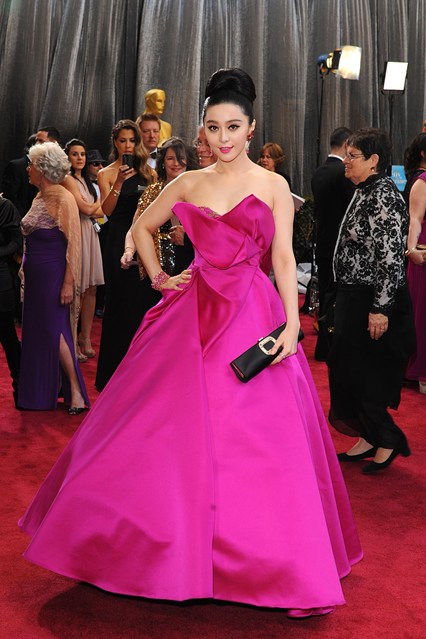 Fan Bingbing’s fuschia Marchesa gown (straight from their Fall 2013 collection, debuted at NYFW only a couple of weeks ago) was certainly the loudest dress on the red carpet. It was a shame that the beautiful actress and singer opted for such an overbearing gown, when her red carpet looks are usually superb, such as the incredible Elie Saab gown she wore to Elton John’s Oscars after-party. 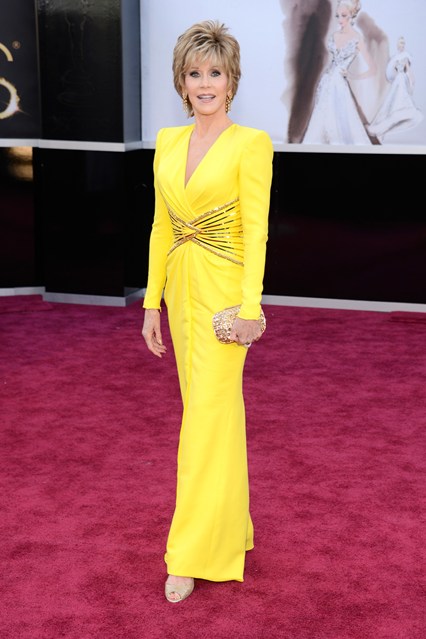 The biggest sartorial offense came from Jane Fonda’s hideous Versace dress. It was disappointing to see Fonda’s great figure affronted by the obnoxious canary yellow, and the power shoulders and tacky gold waist detail, along with Fonda’s choppy haircut and highlights, seemed to be more suitable for the cast of 1980s soap opera than the red carpet. Combined with the awkwardly short hemline and the choice of nude shoes, it all added up to a confusing, conflicting look.