‘Dewey defeats Truman’: why headlines matter
Clog poll: If you were a Cal building, what building would you be and why?

My semester at sea: Tibet

According Joe Lurie’s “International House: An Informal History,” in 1909, Harry Edmonds greeted a Chinese student “good morning” on the steps of Columbia University library. The student replied, “I’ve been in New York three weeks, and you are the first person who has spoken to me.”

This was the spark that led to the International House movement.

In collaboration with John D. Rockefeller Jr., Edmonds built an international house in New York in 1924 where both foreign and American students could live together. The house was a huge success, and the vision to create spaces where intercultural connection could combat ignorance, prejudice and misunderstanding grew. Then, Edmonds and Rockefeller turned to Berkeley.

After initial resistance to different ethnicities sharing the same home and men and women living together, Edmonds began construction on Piedmont Avenue. The decision to place I-House at the head of the UC Berkeley campus facing the Pacific Ocean, in addition to being on a street housing fraternities and sororities that, at the time, excluded foreigners, symbolized a joining of the East and West and a profound change in culture.

In a letter to University of California president Robert Gordon Sproul, Rockefeller explains his reason for funding the project:

“By bringing together in unfettered cooperation the educated young people of all lands, many of whom will in years to come be leaders in their several countries, and by giving them the full opportunity for frank discussion on terms of equality, there is being performed, I believe, a service for the well-being of the world, the importance of which it is difficult to over-value. International House is a laboratory for a new kind of experiment – the day-to-day practice of international fellowship among men and women.” — John D. Rockefeller Jr., I-House Benefactor 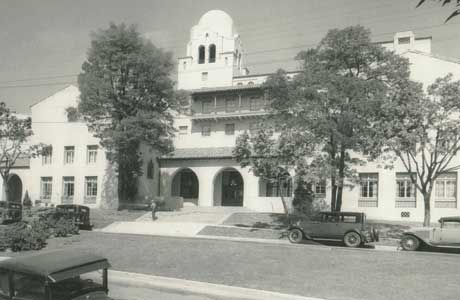 As World War II grew closer, I-House became a symbol for unity, embodying their motto: “That brotherhood may prevail.”

In 1941, president Robert Gordon Sproul — who was also president of the I-House board — addressed an I-House audience:

“There are no inferior people, there is no master race set apart from common humanity. Friendship still has a true, juster speech than that which rings in the clash of arms or the clink of trader’s coins.” (From “International House – An Informal History“)

“I remember watching the lights go out all over the Bay Area during air-raid blackouts. There we were, Americans, Japanese, Germans, Europeans, Asians, Africans, students whose homelands were on both sides of the war — literally and figuratively holding hands in friendship as the candles flickered and the news flashes of fighting came in from Honolulu, from Manila, from Singapore, from London.” (From “International House – An Informal History“)

Remember the multiple Academy Award-winning movie “Argo”? It was sparked by former Canadian ambassador Ken Taylor, who played a pivotal role in the escape of six Americans from Iran in 1979. Know where he met his wife, Patricia Taylor? Over breakfast in I-House’s dining hall.

More than 1000 of I-House’s alumni have found true love at I-House. In fact, there’s an entire web page dedicated to the interracial relationships sparked under its dome. So if you’re hunting for the love of your life, try I-House!

I-House creates its own unique culture of interconnectedness and inclusivity through speaker and movie series or simply eating dinner with other students every night. The culture of I-House inspires students experiencing as much as possible during their limited time in Berkeley.

So if you ever decide to spend a semester or two at I-House, be prepared to be swept up in the utter excitement of making every precious moment count.

But really, I-House is the best