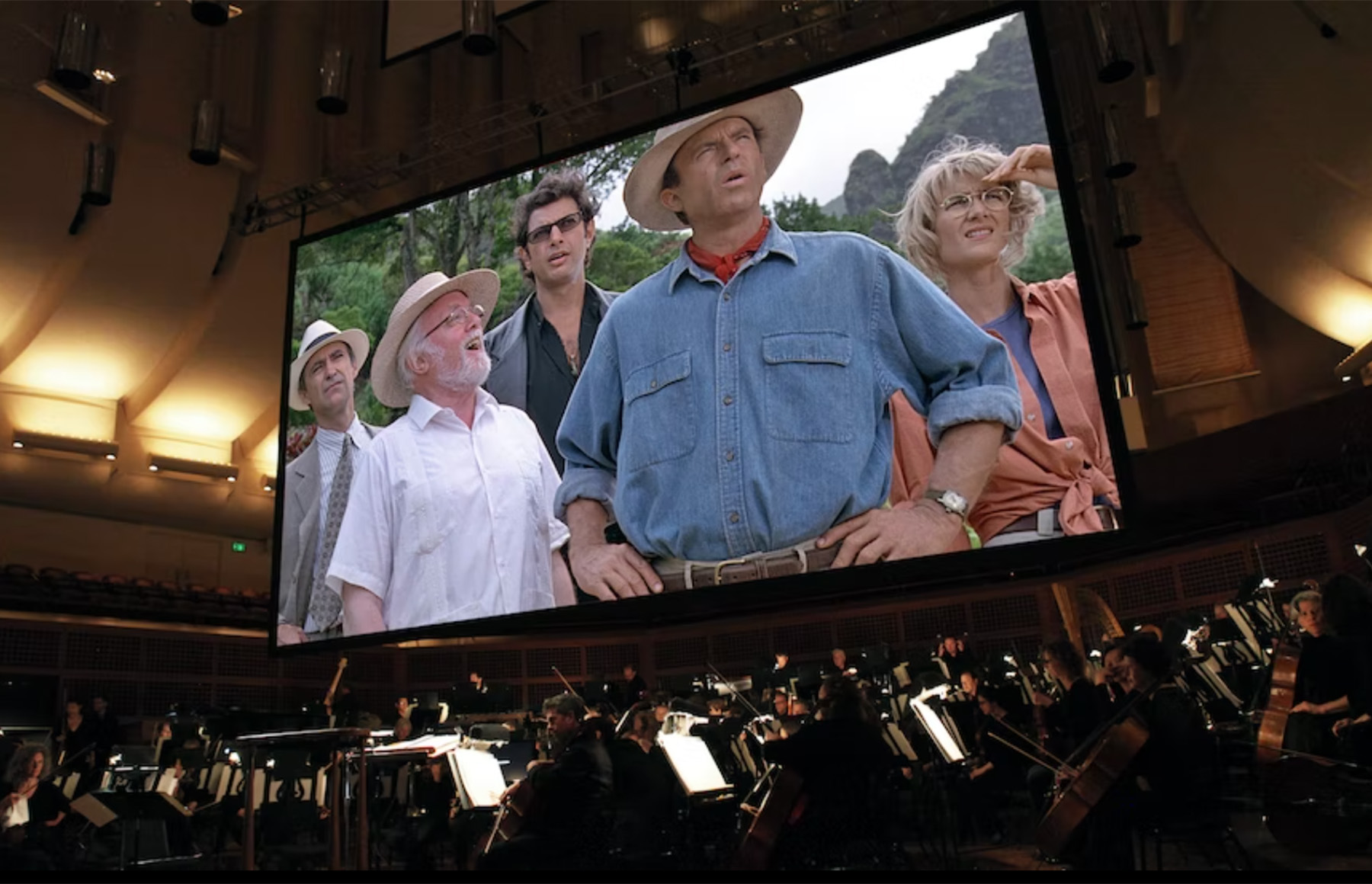 On the night of Jan. 7, the sky was kind enough to hold its storm back for concertgoers making their way to Davies Symphony Hall, yet the high anticipation of a downpour mirrored the venue’s inviting whispers.

Inside, the San Francisco Symphony reared its head majestically. For the second night in a row, the orchestra performed an adapted version of John Williams’ eminent “Jurassic Park” score in time with the film playing on screen. Released in 1993, Steven Spielberg’s science fiction film follows paleontologist Dr. Alan Grant (Sam Neill) as he attempts to escape a theme park of cloned dinosaurs, Jurassic Park, while protecting the park founder’s grandchildren (Lex Murphy and Joseph Mazzello).

Led by composer Constantine Kitsopoulos’s steady hand, the SF Symphony harnessed and highlighted the power of Williams’ vigorous score. At times, audience members would lose themselves in the film’s fast pace, but as soon as bows and mallets pricked up, every gaze dropped to the stage. The symphony’s synchronous movements foreshadowed dense pockets of action, with the mesmerizing flittering of hands always matching the pace of conflict.

On the screen hanging above the orchestra, the film blinked to life. As the hall’s lights dimmed to black, the rasp of a rainy jungle enveloped the audience. The musicians’ reading lights on stage were suddenly stagnant fireflies, illuminating lilypad sheet music in the blackness. It wasn’t long before the film’s woodsy buzz was interrupted by the bass drum — a foreboding, echoing boom shook the venue, signaling the peril and exhilaration to come.

Before Dr. Grant and his team arrived at Jurassic Park, the symphony whisked viewers away to an amber mine in the Dominican Republic, where a mining crew discovers a mosquito preserved inside a mass of amber. As the camera zoomed in on the chunk of amber, the symphony swelled with a hair-raising edge. Although the recorded audio was a tad high-pitched and at times distracting, the musicians’ grace nimbly eased over any auditory discomfort.

Before long, cymbals were crashing as Isla Nublar, the tropical island hosting Jurassic Park, came into view; with great spirit, the symphony surged forward in its sparkling performance of the film’s famed theme. The theme’s ardor reverberated with optimism, yet it also hinted at the park’s ominous opportunity.

As Kitsopoulos led with virtuosity, the SF Symphony reflected the film’s staggering intensity with mastery, guiding audiences through concentrated action and lighthearted banter. Rows of violins subtly stitched together rare waves of faux serenity, built only to be shattered by acute melodrama. Between high speed chases and door slams, the brass section and bass drum bubbled together with low trepidation.

Alternatively, the symphony found renewed strength when it leaned into the occasionally quirky perkiness of Williams’ score. The woodwinds merrily wiggled through the wacky video explaining how dinosaur DNA was cloned, with a particularly playful personality beaming from the clarinets. Later, the harp’s enchanting glissando imbued a scene of hatching dinosaur eggs with remarkable wonder.

As the film plunged into the murky thick of conflict, the symphony escalated tension tactfully. Deep cello and bass slithered together, alternating with the full force of the brass section in true John Williams fashion. Tight, eerie runs from the string ensemble accompanied gazes following broken dinosaur eggs and footprints.

After severe suspense and profound loss, the resolution of “Jurassic Park” felt like a sigh of relief. Soothing piano relayed the safety of the protagonists’ teary helicopter ride home. Even after the dense action, its twinkling tenderness did not feel out of place.

Although the credits began to flash on screen, the concert was not yet over: As names fluttered by, the symphony returned to Williams’ acclaimed theme with delight and magnitude. Melding softness and suspense through magnificent vigor, the show’s final moments honored the film’s artistry and rightfully earned a standing ovation.

The SF Symphony’s performance on Jan. 7 astonished as a special extension of “Jurassic Park,” a live version of a behind the scenes experience. It triumphed in its honoring of legends Williams and Spielberg — from disquieting to sprightly to genuinely awe-inspiring, the SF Symphony was nothing short of rapturous.